A WEYMOUTH guest house owner who used his loaf is celebrating after visitor feedback saw his business claim a top award for a second time.

It comes after the venue previously won the award in 2013.

A spokesman for Late Rooms said the Top Rated Simply The Guest Award 2016 is awarded to overnight establishments that have more than 80 per cent genuine reviews from staying guests over the last 12 months.

Lakeside Guest House has a review score of more than 95 per cent on LateRooms.com

The guest house first opened its doors to visitors four years ago and received its first award from LateRooms in 2013, having proved very popular with guests from all over the world.

Proprietor Martin Bliss said the key to its success had been the little extras and he was looking forward to another busy year for Weymouth and his guest house.

He said: “We have had Guests from as far as Australia, USA and even Nepal and a popular point of talk at breakfast time is my homemade bread – The Lakeside Loaf – which the guests rave about!

“I come from a line of bakers originally from Banbury in Oxfordshire who started the Banbury Cake.

“The Lakeside Loaf is a secret recipe and guests are given the recipe after staying one night at Lakeside!

“We are looking forward to a busy season ahead and some great weather as Weymouth is a wonderful place to live and visit and Late Rooms provides a great service and opportunity for visitors to come here.”

To check out some of the Lakeside Guest House reviews visit laterooms.com/en/hotel-reservations/276455_lakeside-guest-house-weymouth.aspx#reviews 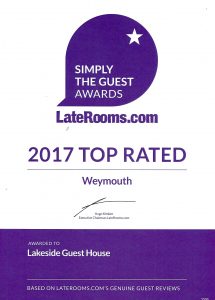